The Art Of Spinning

A performance art for everyone. Go with the flow today.

The Shashka • Flow Arts • What is Flow? • The Benefits 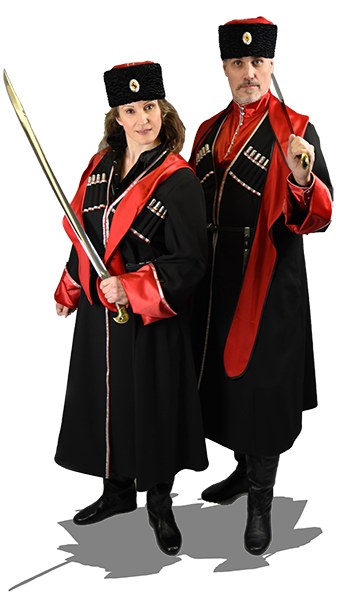 What? We do a lot of unique things at Royal Arts. While most of our work is done with fencing (Olympic and Historical), we also use the swords in a more performance based art. From our choreography troop performing with weapons of choice from the historical to the present to the future (lightsaber). The Art of Flankirovka is a workout that is a fun mix of swordsmanship, dance, and fitness. But first, let's figure out what it is...

The shashka or shashqua is a type of calvary saber from Russia. It, historically, was a very sharp, single-edged sword with no guard and pretty tip heavy. The curve of the blade allowed it to be deadly at cutting and thrusting. White it has no guard, it does have a distinctive pommel shaped like a beak, which was common to cutting weapons of the area. It was principally used by the cossacks throughout the Caucauses. While there are different style, it is related to the varieties of Turkish, Georgian, Polish, and Western China versions of a saber.

The Cossacks were border guards and hired soldiers instrumental in protection of much of the region and with an important role in the Russian Revolution. Post-revolution, the shashka was adopted by the Russian Army as its principle edged weapon.

The word shashka actually means "long knife." In that sense it is similar to a machete or messer.

The art of the spining and manipulation of the shashka is called "flankirovka." Of course, we do not spin sharp weapons. We like keeping students.

Historically, cossacks trained for the shashka with other items such as the "nagaika," as small whip designed for use with your horse. They spun wood sticks and other items as part of their training. If you're feeling particularly brave, sometimes they spin logs.

Go with the Flow

Flow Arts is a generic term that loosely groups together any art that involves dancing or playing with a prop, manipulating it, and usually spinning it. That includes swords, various weapons and items from wushu, poi, staff spinning, some forms of juggling, meels (Indian Clubs), etc.

Flow Arts is the generic terms given to the arts and generally used only in the USA. Flankirovka, the art of spinning and manipulating a shashka, poi, and other arts in their own cultures are usually focused on the uniqueness of their culture and art rather than lumping it into a broad group. You know, we have to call it something. Somewhere in the early part of the century they came up with Flow Arts to cover all that. Spinning was already taken.

At Royal Arts we spin shashakas, lightsabers, staves, poi, meels, and anything else we can get our hands on. It's addictive because of the Flow.

Athletes get "in the zone." That's essentially what "Flow" is. It is t hat state where you lose yourself completely in the art of spinning and you then find your flow. It's walking, dancing, moving meditation. Maybe Tai Chi with props?

When you are spinning and in the flow, it is incredibly creative and relaxing while you are getting a workout. What could be better?

What's In It For Me?

Getting in the flow spinning whatever variety of stick, sword, tethered ball, etc has numerous health benefits. Some are listed below. Mileage will vary: