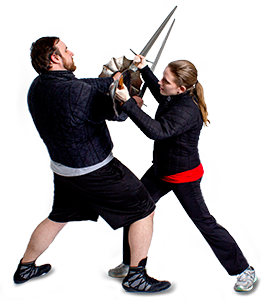 Royal Arts is proud to present the opportunity to learn and train in the art of the longsword as a part of our historical fencing series. The longsword was popular in Western Europe during the late Medieval through most of the Renaissance periods (1300s - late 1500s ) and had many variations. The weapon developed in size, shape and primary purpose as armor evolved and as the ascendance of guns switched combat from armored to unarmored. It was gradually replaced by the military cut and thrust sword and the unarmored civilian dueling rapier as western warfare changed. Schools of fencing existed through all these time periods, with training methods being the fighting methods in use at the time, eventually becoming modern sport fencing schools. The Royal Arts HEMA program is a chance to learn the earlier methods of historical fencing before they became the modern sport fencing in current use. 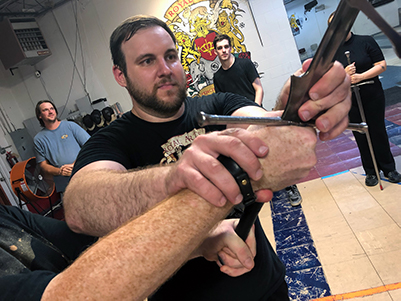 Our curriculum uses the longsword as a skill base, but also includes several forms of sword, dagger and unarmed skills, all based on actual historical source manuals from the 11th-15th centuries. It is a highly sophisticated and dynamic art based on core common concepts brought to life from the historical manuals. Longsword fencing is not like you see in the movies. It is an agile, athletic weapon that utilizes every part of the weapon as well as involving grappling, disarms and many other components not used in modern fencing. It's great fun! 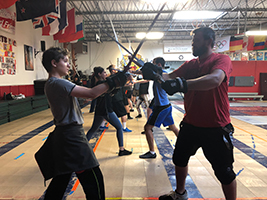 Royal Arts presents a beginners class on Mondays at 7:50pm and experienced fencers on Wednesdays from 6:30 pm - 8:30 pm. New classes begin monthly. Sign up for a class today or stop by and see what we do. Beginning classes are $80. See staff for details about prices after introductory class.