Tierna Oxenreider of Reynoldsburg earned a bronze medal in the Youth 10 Women’s Epee competition. She has been fencing for four years. She is currently number one in the country in her age group. This year, Oxenreider traveled around the country to numerous regional events and the March North American Cup. She only lost one bout the entire season prior to her arrival in San Jose.

Laine Massick of Blacklick earned a bronze medal in the Youth 10 Women’s Foil event and has been fencing for four years. She is currently number 3 in the country. Previously this year, Massick earned over half a dozen medals around the country at super regional tournaments and a bronze at the March North American Cup.

Attorney Joseph S. Streb of Upper Arlington won the bronze medal in veteran foil and a fifth place medal in veteran saber. Streb is currently number two in the county in veteran foil and number three in veteran saber. Streb is a several time national champion in veteran foil and a part of the veteran national saber team that won gold in team saber at the 2013 Veteran’s World Fencing Championships in Varna, Bulgaria. All three fencers train at Royal Arts Sport Fencing Academy in Gahanna. Streb is coached by himself and his son, Joseph T. Streb. Oxenreider and Massick are coached by head coach Julia Richey, a 13-year member of the Russian national team, veteran national champion and several time medalist in the US. Royal Arts teaches sport fencing, historical swordsmanship, and Star Wars style lightsaber combat.

The Olympic sport of fencing consists of three weapons, foil, epee, and saber. Foil and epee are thrusting weapons where only the tip can score. Foil target is restricted to the torso while epee can hit anywhere head to toe. These weapons are based on dueling swords. The saber is a calvary style cutting weapon with a knuckle guard to protect the hand. Saber target is everything waist up. Fencing is one of four sports that has been in every modern Olympics since 1896. Epee is also a part of the modern pentathlon. 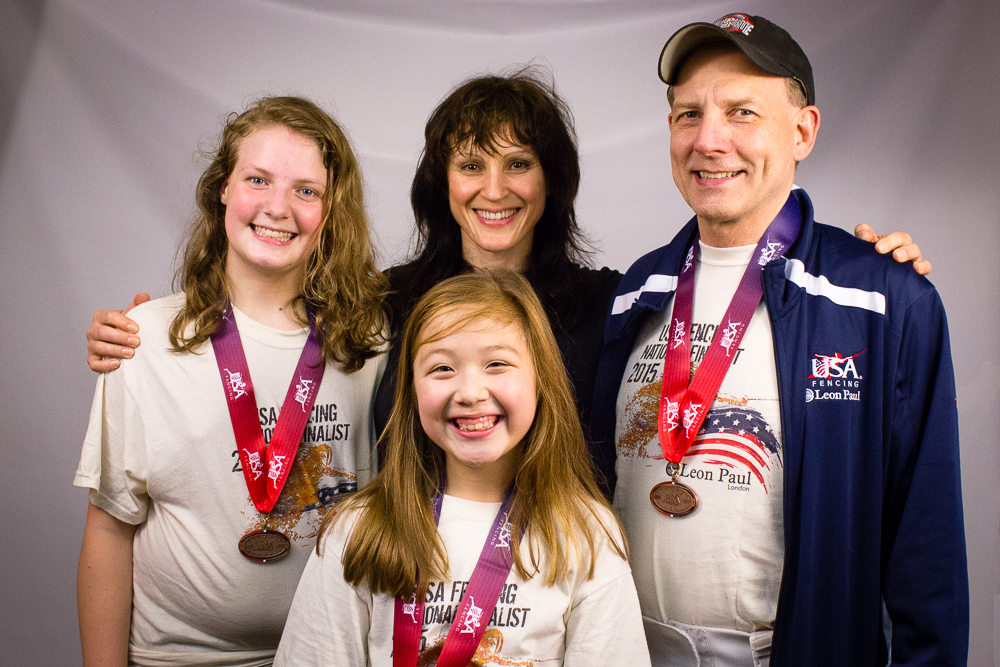 Costumed Appearance Request our troop of costumed performers to show up at your event as superheroes, or historical fencing characters. Can be done as stage performance by us or workshop. Birthday Parties Whether you want to be Captain Jack Sparrow or Zorro, or any other sword-wielding hero, a fencing themed party is great fun. Shakespeare in the Classroom We travel to schools studying the Bard, particularly Romeo & Juliet or Hamlet and let your students try fencing. Bachelor / Bachelorette Parties What could be better than a sword fighting bachelor or bachelorette party can be great fun. A very high demand item! Olympic fencing, lightsaber, longsword. Your choice!
Girl Scout Troops Bring your Girl Scout troop to Royal Arts for a one-of-a-kind experience learning fencing. Boy Scouts It's the adventure of a lifetime. Bring your troop and cross blades to see who is the champion of the troop. Artistic Fencing Learn fencing as an art form. Whether you want choreographed fights or artistic interpretations of fights we've got you covered. Available for foils, epees, sabers, longswords, rapiers, lightsabers, shashkas, you name it!
Shashka Workshops Learn the basics of the art of flankirovka, working with the Russian shashaka. Duel the Boss Treat your company to an exciting treat. Learn negotiating skills with a sword and maybe even work out frustrations with co-workers. Then, duel the Boss! Member Services Existing Royal Arts members can log on to see member only information, book lessons, pay for services, etc. Everything you could need in one spot!
Call: 614-330-2445
Royal Arts Sport Fencing Academy • 5770 Westbourne Ave, Columbus, Ohio 43213 USA • Email Us • PH 614-330-2445 • @royalarts
© 2001-2023 by Royal Arts, LLC. All Rights Reserved.